Home   : :   Applicability, Procedure, Due date, Rules and all about e-Form DPT-3 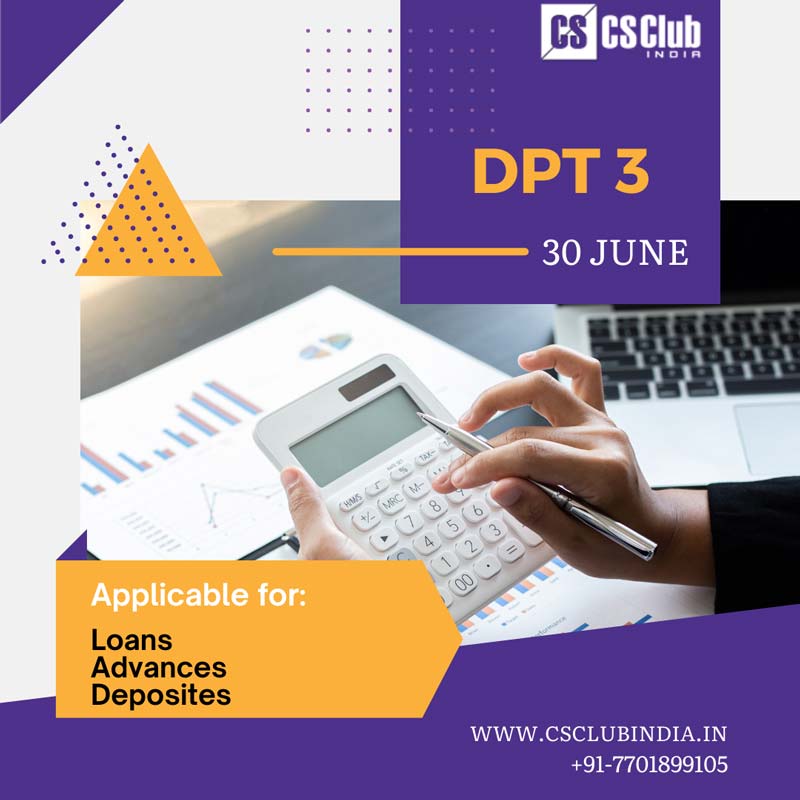 Applicability, Procedure, Due date, Rules and all about e-Form DPT-3

Form DPT 3 is a return of deposits that all companies whether it is a small Company, OPC, Private, Public, listed, etc. other than Government Companies must file to furnish information in the e-form DPT 3 on an annual basis about deposits and/or outstanding receipt of loan or money other than deposits.

Ministry of the Corporate Affairs vide its notification dated 22nd January 2019 notified that every company other than a government company must file a one-time return in DPT 3. It is also required to be filed annually. Accordingly, a sub-rule (3) was inserted after sub-rule (2) in Rule 16A of the Companies (Acceptance of Deposits) Rules, 2014 which reads as follows:

1. (1) These rules may be called the Companies (Acceptance of Deposits) Amendment Rules, 2019.

(2) They shall come into force on the date of their publication in the Official Gazette.

2. In the Companies (Acceptance of Deposits) Rules, 2014 (hereinafter referred to as the said rules), in rule 2, in sub-rule (1), in clause (c), in sub-clause(xviii), after the words “Infrastructure Investment Trusts,” the words “Real Estate Investment Trusts” shall be inserted.

3. In the said rules, in rule 16, the following Explanation shall be inserted, namely:- “Explanation.- It is hereby clarified that Form DPT-3 shall be used for filing return of deposit or particulars of transaction not considered as a deposit or both by every company other than Government company.”.

(3) Every company other than a Government company shall file a one-time return of outstanding receipt of money or loan by a company but not considered as deposits, in terms of clause (c) of sub-rule 1 of rule 2 from the 01st April 2014 to the date of publication of this notification in the Official Gazette, as specified in Form DPT-3 within ninety days from the date of said publication of this notification along with fee as provided in the Companies (Registration Offices and Fees) Rules, 2014.”.

e-form DPT-3 is applicable to all the Companies whether it is a Small, OPC, Private, Public, Listed, etc. except the followings:

“deposit” includes any receipt of money by way of deposit or loan or in any other form by a company, but does not include such categories of amount as may be prescribed in consultation with the Reserve Bank of India;

But Deposit does not include the items as mentioned in the Rule 2(1)(c) of the acceptance of Deposit rule 2014.  These are called Exempted deposit

Companies to whom DPT 3 needs to file:

DPT 3 needs to file by the Companies in the Financial year if:

Due Date for filling DPT-3

The Due date of filing of DPT-3 is 30th June every year.

Period of Filing of DPT 3

If the company falls under the category who Accepted Deposit and they need to file DPT 3 but if they do not fill the form following consequences will be applicable:

A penalty of a minimum of 1 crore or twice the amount of deposits whichever is lower, which may extend to Rs. 10 crores

For every officer who is in default imprisonment up to 7 years and with a fine not less than Rs.  25 lakhs which may extend to Rs. 2 crores.

Company and every officer in default a fine which may extend up to Rs.  5,000, and where the contravention is a continuing one, a fine of Rs. 500 for every day since the default.

How Can We Help?

If you need any help, please
feel free to contact us.

Let Our Expert Call You Back